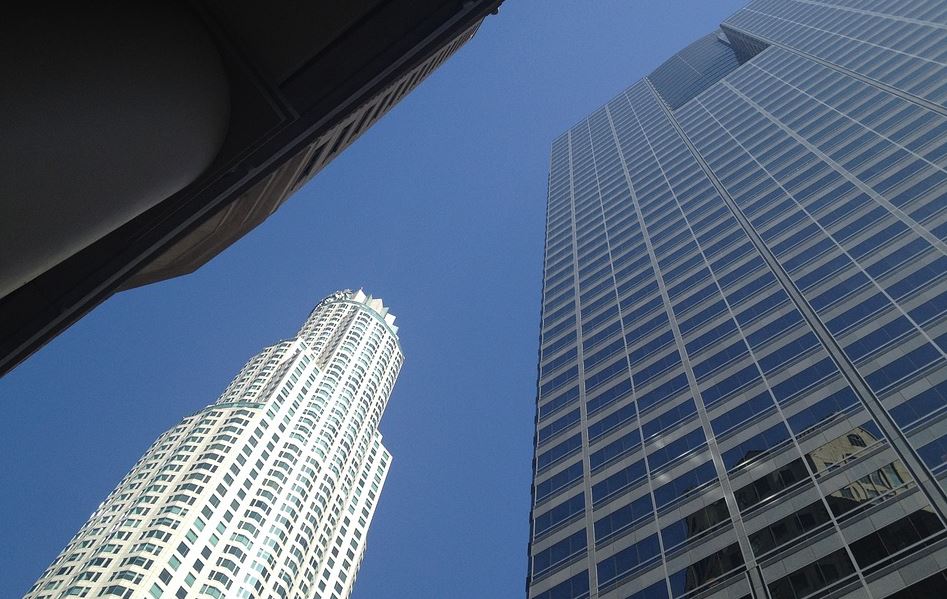 Downtown Los Angeles, or as we locals call it, “Downtown L.A.” is a special place for any Angeleno. It has always been the heartbeat of Los Angeles’s business and commercial scene, but most recently – also has transformed into an entertainment hotspot. The buildings in Downtown each have a story, about a city that has experienced so much in its short history. Here are some of the buildings and sites, definitely worth seeing when you visit Downtown L.A.

Downtown L.A. is just 10 miles from UCLA, and is easily reached by taking the Interstate 405 South, to the Interstate 10 West. The trip can take anywhere from 30 minutes to over one hour – depending on time of day and traffic conditions.

Grand Central Market has been a bustling bazaar for fine food since 1917, and is a combination of three historic buildings – the first built in 1897. Here, you can find over fifty individual vending kiosks and stalls, selling everything from vegetables and fruits to find hers and spices. You can even find eateries like Sticky Rice and Eggslut serving high-quality food to visitors. Visit the Grand Central Market website for more information and directions.

Want to see some great views of Downtown L.A. from Bunker Hill? Angels Flight is a 117-year-old funicular (the shortest in the world), that has allowed over 100 million people to do just that! After you climb the hill on Angels Flight from Hill Street to Grand Avenue and California Plaza, you’ll find some great dining options nearby at California Plaza and Water Court. During the summer, a concert series called “Grand Performances” also takes place there, celebrating all the cultural diversity of the city. Not only is Angels Flight a convenient way to ascend from one part of Downtown L.A. to another, but it is riding a part of L.A.’s history. Visit the Angels Flight website for more information and directions.

L.A.’s newest concert hall is also perhaps its most beautiful. The Walt Disney Concert Hall opened in 2003 to much acclaim, and from a large donation to the city from Walt Disney’s widow, Lillian Disney, to reflect her husband’s devotion to the arts and Los Angeles. On its facade, the silver and curvy exterior represent sheets of music in the wind. Inside, the acoustics are second to none. The concert hall has been praised for its amazing ability to capture and please its audience with brilliant sound. An architectural masterpiece and one of the most acoustically sophisticated concert halls in the world, it is the home of the Los Angeles Philharmonic and Los Angeles Master Chorale. Visit the Walt Disney Concert Hall website for more information and directions

The Broad is L.A.’s newest contemporary art museum, opening in 2015 to great fanfare. Located in the Bunker Hill neighborhood of Downtown, its exterior is especially striking: a cream facade or “veil” covers the entire exterior and depicts the modern nature of not only the building but also the art inside. The permanent collection includes over 2,000 works from famous modern artists like Andy Warhol, Roy Lichtenstein, Jeff Koons and Cindy Sherman. The Broad is definitely worth a visit for any fan of modern art and is located near the MOCA Grand Avenue museum, another location for great, contemporary art in Downtown Los Angeles. Visit The Broad website for more information and directions.

The Bradbury Building is not much to look at from the outside, but inside, its a voyage back over 100 years in time and a stunning architectural wonder that has made it a National Historic Landmark since 1977. The building was completed in 1894, and was designed as a monument to gold-millionaire Lewis L. Bradbury. Although he never saw its completion, he went to the greatest length to make sure it was the most ornate design of a building in Los Angeles at the time. The use of yellow and pink unglazed bricks, terracotta, sandstone, polished wood, and Mexican tile, coupled with wrought iron and natural sunshine give it an inviting and unique design. Visit the Bradbury Building website for more information and directions.

Once L.A.’s tallest building, Los Angeles City Hall still towers over Grand Park and the Civic Center neighborhood of Downtown Los Angeles. Its 32 floors include an observation deck on the 27th floor, with sweeping views of the city, which is free and open to the public between business hours Monday through Friday. The Art Deco style of the building adds to its beauty, and it has been captured in several television shows and films including Dragnet and Gangster Squad. The concrete of City Hall is made from sand from each of California’s 58 counties and water from 21 of its historic missions. Visit the Los Angeles City Hall website for more information and directions.

Grand Park is Los Angeles’ version of New York’s Central Park, but not nearly as robust in size. However, at 12 acres the park was designed with beautiful tree-shaded sidewalks, interactive fountains, drought-resistant plants, and beautiful scenic squares perfect for year-round events and gatherings. The Community Terrace features a large picnic area, a performance stage, and a massive lawn. The “N.Y.E. LA” New Year’s Eve celebration for Los Angeles – equivalent to the ball drop in New York’s Times Square is held annually at Grand Park. Visit the Grand Park website for more information and directions.

Called the “Last of the Great Railway Stations” in the United States, Union Station is still a major rail and bus transportation hub in Los Angeles. Over 110,000 people go through the station each day and walk through its giant concourse which is an architectural gem. The station was designed in 1939 to combine all the major railroads at the time in one terminal, and was designed in an Art Deco, Mission Revival and Streamline Modern styles. The terracotta floors combined with marble, the exposed ceiling which looks like wood, and the massive ticket counter with its 62-foot ceiling and 110 foot desk, take you back to historic 1930s Los Angeles. Union Station continues to be featured in several movies and television shows because of its architectural beauty. Visit the Union Station website for more information and directions.

The Los Angeles Times said no city has “a more impressive museum of collection of contemporary art” than Los Angeles does at MOCA. With over 6,000 pieces of video art, sculptures, paintings, photos and prints in abstract, expressionist, minimalist and other contemporary art styles – MOCA boasts a wide and impressive collection. Jackson Pollock, Jasper Johns, Piet Mondrian, and Paul McCarthy are just some of the artists with works at MOCA. Visit The Museum of Contemporary Art, Los Angeles website for more information and directions.

The number one destination for entertainment in Downtown L.A. is L.A. LIVE. Adjacent to the Staples Center, home of the L.A. Lakers, L.A. Clippers and L.A. Kings, L.A. LIVE has over 14 acres of restaurants, bars, movie theaters, concert spaces, and an open-air pavilion (Microsoft Square) used for events including a giant ice-skating rink during the winter holiday months. The Grammy Museum is also located at L.A. LIVE, as well as the popular Microsoft Theatre, which hosts concerts from major performers and award shows like the MTV Video Music Awards and Primetime Emmy Awards. The 54-story Ritz-Carlton/JW Marriott hotel also features great dining and is surrounded by restaurants like Wolfgang Puck Bar & Grill, Yard House, Fleming’s Prime Steakhouse & Wine Bar, Rock’N Fish and Lawry’s. Visit the L.A. LIVE website for more information and directions.

Need a rest from all Downtown has to see? Then head to Pershing Square – Downtown’s main central park. Unlike the one in New York City, Pershing Square is small – and just one square block in size. It is also mostly concrete; however, it is bounded by some of Downtown L.A.’s oldest buildings along its perimeters – many of which are architectural gems. This includes the iconic Millennium Biltmore Hotel, in its Beaux Aarts style. This beautiful park has ice skating in the winter months and hosts other Downtown community events. Its notable design includes a 10-story purple bell tower and fountains, as well public art including a walkway representing an earthquake fault line. Visit the Pershing Square website for more information and directions.

Downtown Los Angeles, or as we locals call it, “Downtown L.A.” is a special place for any Angeleno. It has always been the heartbeat of Los Angeles’s business and commercial scene, but most recently – also has transformed into an entertainment hotspot.